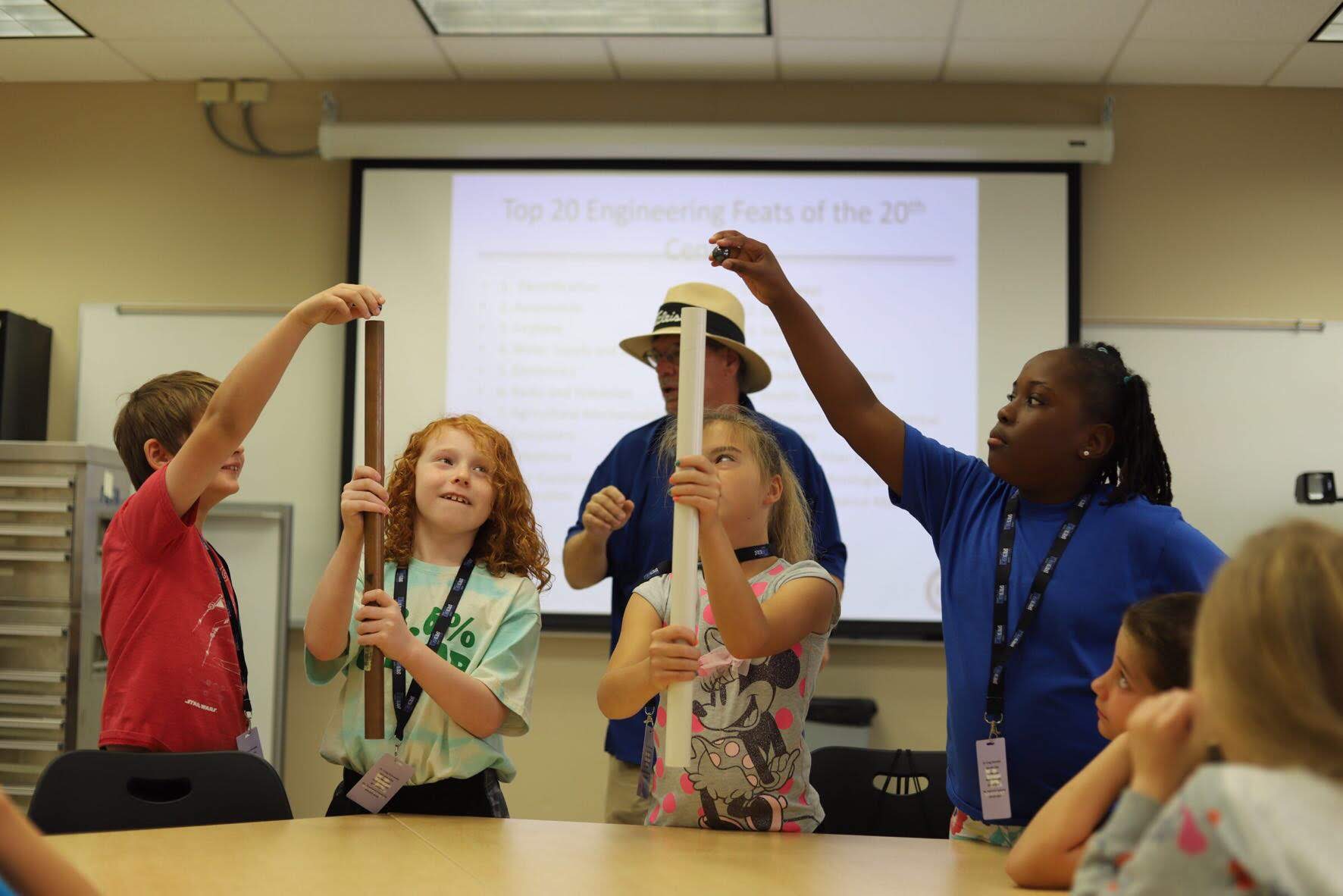 It’s hard to believe we had to say goodbye to another set of campers this week! As one student stated when we were leaving – “Well it just feels like Monday to me! I can’t believe we’re already leaving!” There were some tears shed because it was the last day – extra hugs were given and we took it as a good sign that they had a great week together!

The red and blue groups got to spend the day with Dr. Bruce Walcott and his team exploring the different fields of engineering, building simple motors, and playing with Ozobots – a small robot that uses light sensors to read where to go. The students were surprised at the small amount materials and effort needed to make a motor! The purple and brown groups spent their day with Dr. Janet Lumpp and got to dive deep into circuits. They learned why circuits work, what it means to be open and closed, and got to build some of their own circuits. The small challenges were fun for the students and they loved the lights and noises when they successfully completed a circuit! In robotics, today was creative build day. And boy were the students creative! This group this week really embraced the idea of creativity. They had awesome stories to go along with their builds and were very excited to program it to do quite a variety of things. I hope they shared about it with you tonight!

In the yellow and green groups, the students got to spend time in the engineering makerspace with Doug Klein. They saw the 3d printers in action and got to design some pieces themselves. The laser cutter was another favorite! The students brought home a 3d printed cube they got to watch being printed. In robotics, they wrapped up the Trash Trek FLL challenge. There were some great successes, especially around using the medium motor to pick up objects and move them to another spot! This group of students really excelled in programming this week.

In their Own Words…

Photo of the Day… 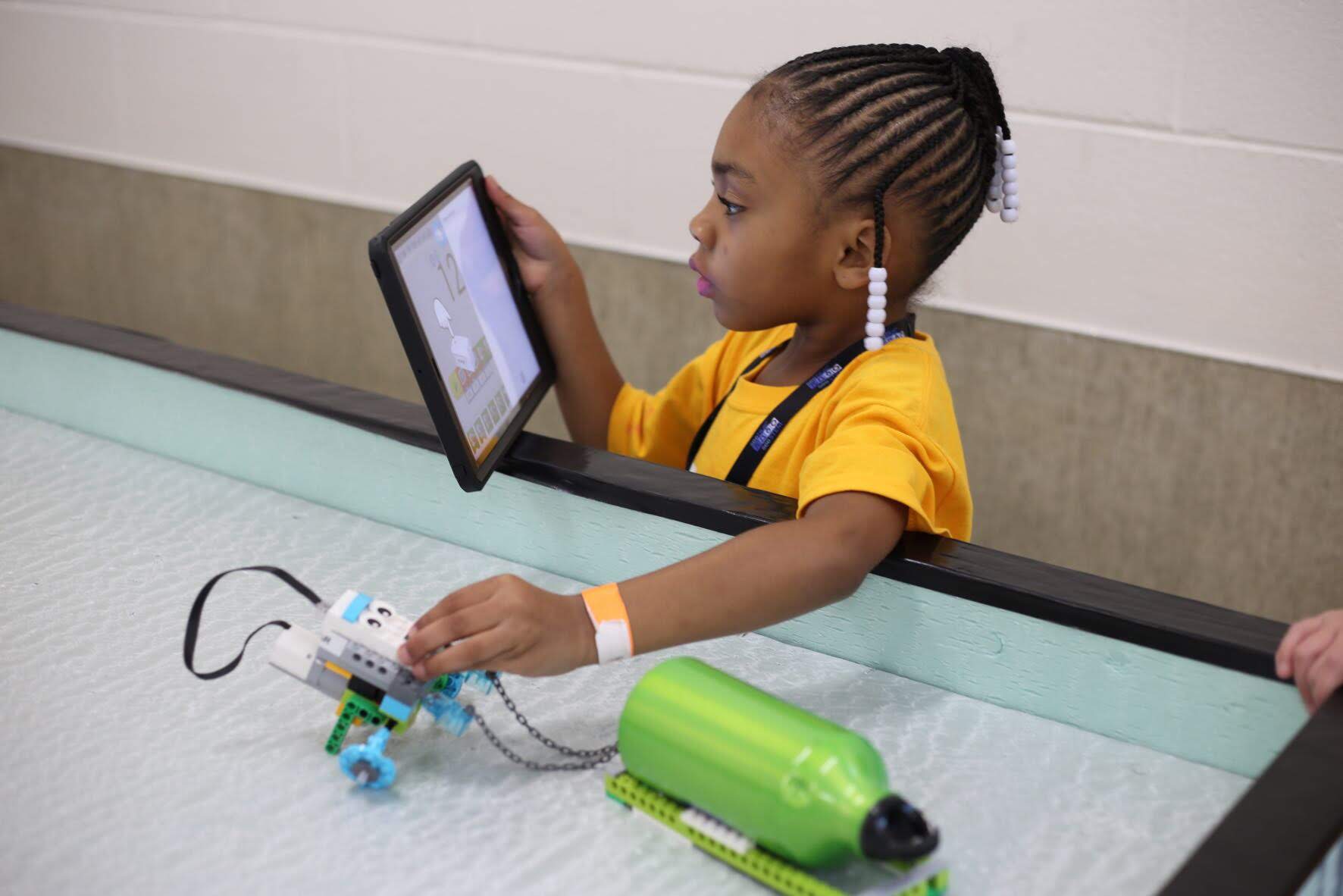 Another fantastic day with this group is in the books! We cannot get over how wonderful the weather has been. We’re usually battling nearly 100 degrees by now and so this has been a welcomed change for our groups this week. While they’re at camp, students get a small flavor of college life by walking to their different sessions. Some walks are longer than others, but they are enjoying being outside and getting some exercise in between sessions. We wish we had a playground for them during the day, but college campus’ just don’t have them 🙂

The red and blue groups today were with Dr. Jonathan Thomas where they did some physics. They learned about airplanes and the different forces that help them fly. They then created all different types of paper airplanes to test out the different types of forces and what affected them. They had a lot of fun testing out their different designs. In the purple and brown groups, they were with Doug Klein in the College of Engineering’s Makerspace lab. They got to see the 3D printers in action, the lasercutter, and other equipment available to the UK students to use to design their products and prototypes for their projects. They got to use some of the software that UK students use to help design the projects. Most came home with a 3-d printed cube. In robotics, they designed race cars and tested them out. We had different kinds of races – who could go the fastest. Who could go the slowest, but still move. Who could go in a straight line. There were some very creative race cars out there! They are really enjoying the robotics, especially the lego-building part. They are doing really well with the coding – it’s really amazing how fast kids pick it up and use it!

In the yellow and green groups, they had fun with Dr. Robin Cooper and his graduate students today. They conducted some small experiments about how the body uses its different senses and communicates them to the brain. They got to hold a brain and spinal cord (if they wanted) and other organs. The students were amazed at what they looked like and felt like! In robotics, they continued with their challenges. One of the favorites today was the C-A-T-S CATS CATS CATS Mat – The groups are really doing a great job!

In their own words…

Picture of the Day…